The BHK Signature 250 and 300 power amplifiers are the culmination of one man’s half-century search for perfection in music’s reproduction. Bascom H. King has designed amplifiers for many companies, some selling in excess of $100,000, including: Constellation Audio, Marantz, Infinity, and Conrad Johnson. This is the first amplifier Bascom felt was good enough to lend his name to. It is his finest achievement in a lifetime of work. Available in both stereo and mono models, the BHK Signature series is unparalleled in its ability to render details formerly lost in the music. The BHK Signature is a hybrid design enjoying performance benefits from multiple design techniques including, a balanced differential vacuum tube input, balanced differential MOSFET power outputs, and separate, isolated, analog power supplies feeding each. When it comes to musically controlling and powering loudspeakers, the BHK Signature has no peer. The stereo Signature 250 produces 250 watts/per channel into an eight-Ohm loudspeaker, 500 watts/channel into four-Ohms, and stable into 2-Ohms; enough power to satisfy even the hungriest of loads. The Mono Signature 300 doubles the output current with half the impedance of the stereo model. Each Mono Signature produces 300 watts into an eight-Ohm loudspeaker, 600 watts into four-Ohms, and 1000 watts into 2-Ohms. But more than just doubling the current, the BHK Signature 300 also doubles every internal component of the 250 into one: double tubes, double power supplies, transistors, capacitors and resistors. The results are hard to put into words. The BHK Signature 300 is a clear step above the stereo 250, on the order of 20% better, though both have the same character of sound. Both the Stereo 250 and Mono 300 are one of the best performing, musical sounding amplifiers ever made. Imagine your delight listening to either.

The input stage is a critical interface


The connection between preamplifier and power amplifier is critical, for it is at this junction where most essential musical details are easily lost. Nothing in the design of a power amplifier is more important than its input stage when preserving music’s finest nuances. In the BHK Signature a vacuum tube serves as the perfect interface between the preamplifier and the massive power output stage inside the BHK Signature. The input stage’s seemingly impossible task of passing both delicate and powerful musical information without loss is made possible by massive numbers of free flowing electrons traveling within the BHK’s vacuum tube; electrons quantities that are not to be found in transistors.

Used as the interface between the preamplifier and the input stage of a power amplifier, tubes have no peer. Invented by Fleming in 1904, and refined by deForest in 1906, the vacuum tube is unique amongst amplification devices: it boils an abundance of free electrons in empty space while modern devices pull fixed numbers through solids. A tube’s high voltage, empty space, rich numbers of electrons and connection through unattached fields preserves details lost in the solidity of silicon. Tubes are the perfect interface between sources and power stages.

The BHK Signature input features a classic triode vacuum tube in a modern configuration. Hand matched pairs of Russian Gold Lion 6922s are self-biased with constant current and high voltage, free of timing and phase distortion without the use of negative feedback. They provide the perfect interface between the delicate musical transitions output by the DAC or preamplifier, and are electrically isolated from the BHK power output stage which is connected to the loudspeaker. 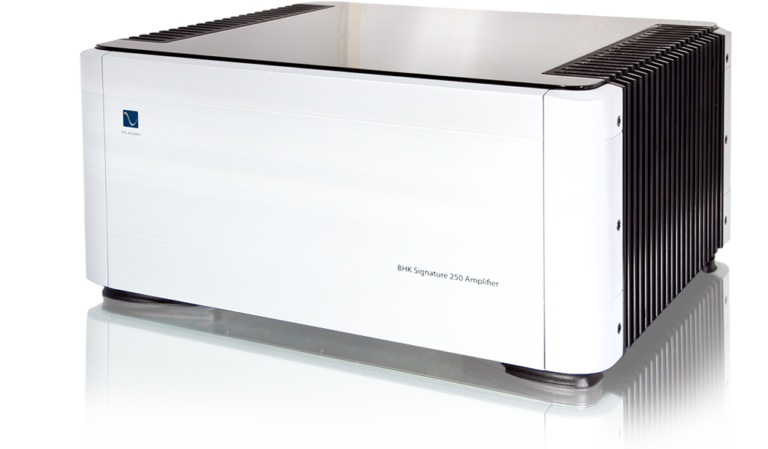